The past few months have been...well, they've been scary.
We still don't have a permanent place to live. We DO have a temporary, long-term place staying with my In-law's in their spare bedroom.
We still don't have a vehicle. My father-in-law drops me off at the bus stop and I ride the bus to school for 1 class, 4 days per week (I dropped down to 2 classes).
We found out, thanks to a trip and fall I had, we found out that we're expecting #3 sometime in April.  Blessing in disguise, perhaps, but I'm not viewing this in the negative.
We also realized that my husband's unemployment will run out around the same time.  So, we've definitely got a timeline, and still aren't getting any calls back on jobs we've applied for.
I've had a LOT of wonderful support from friends, and I can't thank you guys enough.  Seriously.

I've also kept taking orders during this time.  Most have made it to their destinations.  I've STILL had problems with shipping, and I am SO FRUSTRATED by that.  I don't ship enough to have this many problems.  I feel like the only way to make sure everyone gets what they ordered I have to frakking hand deliver every GD package myself.  I've tried EVERY SINGLE shipping company that I can find around here.  EVERY SINGLE ONE OF THEM has lost packages.  *sigh*

And, on top of this...I can't load my facebook page for Sugarbomb Designs.  I haven't been able to load it for 2 weeks.  So, the only way I can post is via twitter (@SugarBombHooker).  THIS IS BEYOND FRUSTRATING.  I know it's there.  Other people are getting into it.  I've got screenshots!  So, facebook has been contacted, let's see what happens. *sigh*

So, in short, I know where I am now.  Kind of between a rock and a hard place.  I REALLY wanted to make this a successful venture.  I created this venture because there were no jobs in my area.  There are still no jobs that will hire me, now that I'm pregnant. (yes, GM and Ford are hiring.  Line work.  They're not going to hire someone who has to take maternity leave in less than a year when they can hire someone else.  And, yes, Joe has applied there, too.)

Hopefully, school will help, at least on my end.  I'm going for Computer Programming (AS), and there are a lot of open jobs in that market in the area.  In the meantime...I'm just doing everything I can to move everything in my life forward. Because I'm tired of being dependent simply because I don't have that magic piece of paper (for customer service!!) or because I'm overqualified (TO WORK AT TACO BELL????).

Maybe next week, I'll have a brighter story for you guys.  Or, at least I can open my Facebook Like Page.  Until then....know that I appreciate EVERY SINGLE ONE OF YOU.
Posted by Jeni Burns at 1:15 PM No comments:

Ok, DDOT. I can handle a late bus once in a while. Actually, I can handle it when the bus is late on a regular basis, I just adjust my schedule accordingly. This is what normal bus riders do, in fact.
But today was literally the last straw. I left my house at 1:15pm to catch the 265 SMART bus east into Detroit, where I got off at the corner of Warren and Southfield.  From there, I normally catch the 46, headed north, to get to Wayne County Community College in time to make my 3:30pm class. Yes, I like to get there early. BUT, that's not the only reason I leave for school so early.
On a normal basis, the 46 headed north is at least 8 minutes late.  Sometimes, it's been 15-20 minutes late. All too often, a scheduled stop goes by, passes with no bus. The next bus comes, it's standard 8 minutes late.  This doesn't just happen today. I pretty much bank on it happening.
So, what DID happen today?  I got to my stop at 1:45pm. There were two women and an infant who had been waiting at the stop for 15 minutes. The 1:46pm bus never showed up.  Neither did the 2:23pm. Or the 3:03pm. Or the 3:43pm. Or the 4:23pm. That's FIVE SCHEDULED STOPS THAT NEVER HAPPENED.
I checked the DDOT site, and while there is a note about extra stops during the mid-afternoon to pick up students from Cody High (which is a GREAT thing, btw), nothing about completely skipping the stop at Warren and Southfield.
I depend on your bus to get me to school. Note, I didn't say on time. I just depend on your bus to get me there. I leave early to get there, not depending on your drivers to be on time, because it's my responsibility to be on time, not yours. I DO expect them to show up to the stop.
I'm publishing this. I am going to write letters to as many officials who have anything to do with DDOT as possible. I have the phone numbers to call and bug officials who deal with DDOT.

This is me venting my frustration, but this won't be the only thing I do.

*to my regular readers: Sorry for the rant. I'll be back to regular craftiness soon!!
Posted by Jeni Burns at 3:42 PM No comments:

Tomorrow is going to be the BEST DAY EVER!!

Because I have the day off of school.  It's not that I don't like it. I'm loving it so far. But, let me level with you.

You've seen photos of me. I am fat.  Without a car, I'm riding Metro Detroit's AMAZING(ly horrible) bus system. I walk a mile to the bus stop, get on, get off to catch my transfer and wait 50 minutes, walk ¼ miles after getting to my last stop, and THEN walk around construction to get to class.

Don't get me wrong.  Many people walk. I...I hate it. I was never a runner.  I used to fake run a lap at track practice in h.s. (I threw shot and disc. The hell did I need to run for? I wasn't being chased by something that wanted to eat me.)  So, let's go with "I'm lazy". That and cupcakes also explain why I'm fat.  I own it.

My thighs hurt. My back hurts, and both feet have blisters. I can't WAIT until tomorrow.

Posted by Jeni Burns at 6:14 AM No comments:

For weeks.
The last 6 months have been really hard for us.  And, right now, they've led to where we are now.
We are officially homeless.  That's not to say that we're living on the streets. Galen and I are staying at my mother-in-law's house, and Joe has stayed with a few friends. Our only problem right now is that I start school Tuesday. If I don't go, I don't get my financial aide.  If I don't get that...well, we have nowhere.  And I am at least a 20 minute drive from the nearest bus stop, with no car.
I would like to think the fiasco this past April wasn't as big of a player as it was, but...I lost $1000 right off the bat. When our income is $1200 per month, that's one month behind. Not to mention refunding roughly $750 in orders, and sending $300 worth of replacements. And we've never really caught up.
At this point, I don't know what to do.  So, right now, I'm asking for help.
But, not without the prospect of giving back.
I have yarn.  I have hooks. I can still offer something.
So, here's the deal.  I am going to work today on updating my store. Everything will be 25% off, still with free shipping.
Please, if you can't help, pass this post on to someone who can.  If you would like to donate, without buying, you can send via paypal to jenicrafts@gmail.com. I will probably still send you thank you presents.
I don't ask for me.  I'm asking for him. 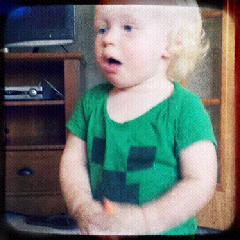 I have made a coupon code, which saves me time, and lets me get to making things that have been ordered today.  Win-win ;)

on Big Cartel and StoreEnvy, the coupon code is GALEN and you get 25% off.
http://sugarbombdesigns.bigcartel.com/
http://www.sugarbombdesign.com (StorEnvy)

Posted by Jeni Burns at 8:21 AM No comments:

I am ALMOST caught up on refunds. Seriously. I think I have 3 left. w00t! (If you can read this, and have waited for a refund, it IS coming.)

I have ALMOST re-written the cosplay beanie pattern, and redid things to make it more sturdy. I like it a lot better.

I am working on this:

It's coming along well. I'm at the hood. I've been working on it basically when Galen goes down for a nap. Which has been maybe 30 minutes lately :/ I envy moms on twitter and facebook who have kids that nap for hours. One day, I hope to have one of those. My kids probably won't do that until they hit the age where they're expected to, ya know, DO THINGS around the house.

For now, I think I need a Pepsi. And to do a little more packing. And make some dinner for the little tyke. :)
Posted by Jeni Burns at 3:07 PM No comments:

So, you want to find me on the internet...

Before I made fun and fancy hats and toys for kids and adults alike, I focused on my art. Mostly my 3D art.

Here's a conglomeration of my 3D, photography, and, well, one ink drawing (ok, doodle).

If you're into making sigtags, I do have a small collection up at MTA, and, once things get back to normal, I'll have more there ;)

I also have more than one store for my crochet goods.

You know my bigcartel store:
http://sugarbombdesigns.bigcartel.com/

But, I also have one at Storenvy

And I put my patterns up on Ravelry:
http://www.ravelry.com/stores/jennifer-burns-designs

I put them there for 2 reasons...one, they take care of everything, including hosting. 2, it's WAY easier to keep track of what you have, and 3, YOU CAN REDOWNLOAD THEM IF YOU LOSE YOUR ORIGINAL FILE INSTEAD OF EMAILING ME. Not that I don't enjoy talking to people via email. I do. I love you all. From a customer's perspective, I HATE having to get in touch with a designer to ask for a new copy because I lost it, or they advertise that they updated the pattern. Ravelry takes care of ALL of that, and it's in one place. It's a no-brainer for me, and ALL of my patterns will be uploaded there.

Anyway, so, there's that. I am back to pattern writing, and store updating. And waiting for the Phineas and Ferb movie to come on tonight.
Posted by Jeni Burns at 8:23 AM No comments:

Lesson of the week

ALWAYS BACK UP YOUR WORK.

All the writing I did for the patterns is gone. *sob*.  That's what I get for only writing them on my phone and not saving them elsewhere.

Posted by Jeni Burns at 6:45 AM No comments: